The Decision to Hike the Bruce Trail

"Knowing the right way on the Bruce Trail is easy, follow the white blazes – if only life where as simple at times."

As I sit here writing I am stunned at the places the simple decision to step out our front door in 2014 and onto the Bruce Trail have taken us in the years since!

Most people who have seen us or who have followed along on our other adventures will no doubt agree that we don’t look very much like the archetypal outdoors people that most expect let alone two individuals that by 2020 would become Royal Canadian Geographical Society Fellows and Explorers.  But for several years now that is exactly the thing we are trying to show people!  To be outdoors people you don’t need to be a professional athlete, have vast specialized skills, expensive equipment or be super rich!  All you really need is simple curiosity. 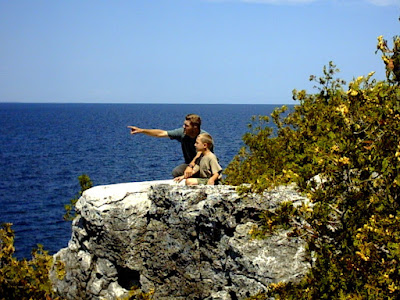 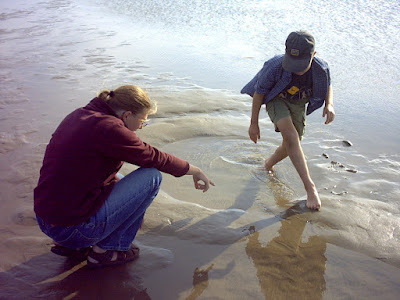 Looking back now to how our adventures all started – on the Bruce Trail – it is hard to see where it would all lead.  Yet the truth is, like everyone else, we developed as hikers throughout the years.  Our time in nature grew from spending our evenings and weekends walking through local parks, exploration conservation areas, and enjoying regional waterways in the Kawartha, to taking weekend camping trips to provincial parks in Ontario’s visiting it’s “crown jewels” like Algonquin, Bon Echo, Killarney, Awenda, McGregor, and the Pinery. 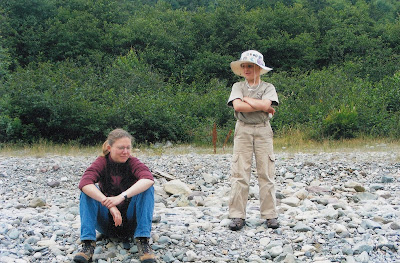 We were also fortunate throughout the years given that my work, as a Graduate Research and Doctoral Scientist put me for months at a time in the outdoors conducting research throughout the province.   This, in turn, often provided Sean the excuse to travel, continue camping, hike throughout Ontario and learn to photograph again.  Throughout these years I don’t think we ever appreciated how lucky we were to have so much natural beauty outside our tent flaps and cabin door. 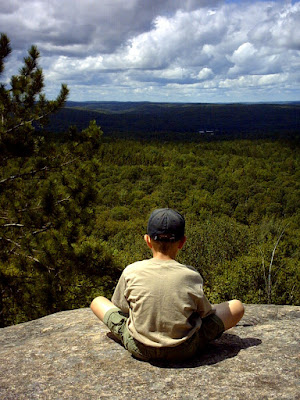 Then, as often happens to so many of us at different moments, time passed and a combination of obligations, desk jobs, and limited financial mobility began to limit our ability to travel, go camping and hike as much as we used to. While from time to time the notion of thru hiking a long pathway, like the Bruce Trail, arose we were never able to set aside enough days or money to tackle the entire 800-900km of the BTC.

Then, sometime later, by the winter of 2013 our world began to fall apart.   It was by this point that a younger relative whom we had helped raise for 15 years began to having increasing problems with his video game addiction.  He had gotten to the point where he was skipping 40 days of school to play video games, stealing from family to buy games, lying to everyone to game, had lost his friends just so he could keep gaming, and had reached a point where he was now refusing to leave his room because it would take him away from his screens and the online world. Adding to this challenge his actions were both excused and being supported by other family members who had long felt that dealing with such situations would be too stressful. The end result was that this talented, kindhearted and handsome young man would need to be sent to a nature school in Algonquin park to get help unplugging and to graduate high school.

At the same time having now received my doctorate I had a desk job that was well paying but which involved little outdoor research and which was subsequently described by the new president of the organization as “not really doing anything significant or meaningful”.  In addition to which my partner had endured a year of digital harassment and assault which had left him physically ill and without a career path.  At a moment in life at which things were supposed to be in order and pulling together, it instead felt like we had lost all direction.

It was also at this point we began to feel that the digital world had taken over too much of our lives.  As we looked around we recognized that we were spending our days working in front of computers, our nights watching movies, and in between we were constantly checking Facebook, Instagram and e-mail.  We began to feel that even though we were almost constantly connected to WiFi that we were nonetheless becoming increasingly disconnected from each other, the natural world, and everything that is actually important.

However the simple fact is, that digital landscapes are no replacement for real ones.

It was time to get back outside, get active and begin recharging ourselves and not just our devices. We wanted to get outside and get active, but we weren't particularly athletic people and we didn't have a lot of extra money.  So we focused on the one thing that is free - we figured we could walk and explore.  It was at this moment, that a good friend, Lenora Sawyer, an amazing high school science teacher suggested that we begin hiking the Bruce Trail from south to north on day trips and weekend outings!

When we began planning things out the Bruce Trail quickly seemed to be everything we had been looking for!  It was close by, it was accessible, it went near residential areas and into the wilds of Ontario and presented a fascinating natural as well as geological possibilities!  More than all of this however it also seemed to defy what most people of think of as nature!

I think it’s fair to say that when most people think of nature they tend to imagine tracts of pristine, untouched wilderness.  Or we think of National or Provincial parks or Conservation Areas.  As a result, what many of us tend to overlook is that nature can be found everywhere, even in Canada's largest cities.  It can be found in green spaces and river corridors, it can be found in the trees outside our windows, in the plants that come up between the cracks in the pavement, in the birds at our feeders and in our own backyards.  There are opportunities to explore and discover everywhere.  All we have to do is step outside our doors!  The Bruce Trail therefore provided the perfect opportunity to explore Ontario and its natural beauty.

The Bruce Trail allowed us to reconnect to nature!

And so in 2014 we stepped out our doors on the first of our treks and have not stopped regularly hiking since.  Indeed out time on the Bruce Trail would in turn lead to other wonderful BTC opportunities.  For several years we would volunteer as Land Stewards taking care of the Dopko Side Trail near Grimbsy in the Niagara section. 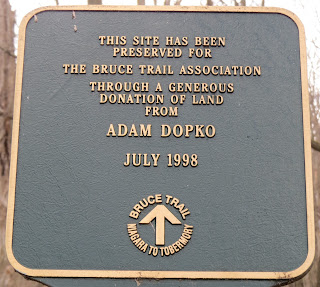 We would have the wonderful opportunity to trek twice on the annual Laura Secord Legacy hike!

We would go on to design the crest for the Steeltown Stomp in Hamilton along the BTC in the Iroquoia section.

We have been fortunate to have several of our photographs – which were taken while trekking the Bruce Trail - receive photography awards and be featured across Canada. In addition to which we have both been honoured to have images we have taken win the BTC photography contest including the 50th anniversary contest!

From 2014 until 2018, as we trekked across Ontario on the Bruce Trail, remembering what it was like to get back to basics and to be rejuvenated by nature our minds began to wonder what other possibilities for exploration we might be able to undertake. 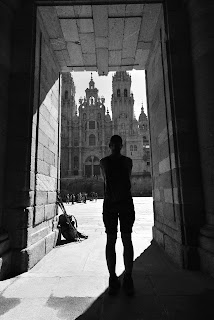 The result was that our first step back into nature on the Bruce lead us step by step to eventually set out across Spain on the Camino de Santiago along the Camino Frances, hike across France on the Via Podiensis/ GR65, and soon after trek the length of Portugal on the Caminho Portuguese Central.

The Bruce Trail also gave us the space to prepare to hike pathways such as Newfoundland’s amazing East Coast Trail and by 2019 it had given us the confidence to sell my house, quit my job and take on the world’s longest pathway – the 27,000km long Trans Canada Trail (also known as The Great Trail).  This adventure - in which we asked everyone to Come Walk With Us - began in 2019 in Cape Spear Newfoundland has since taken us more than 10,000km across Canada having hiked through the Maritime provinces, Quebec, Ontario and across the Prairies!  In 2022 we will hike across Alberta and British Columbia to the Pacific Ocean and in 2023 we will hike to the Arctic Circle completing our amazing adventure!

Yet the simple fact remains that it all began with that first step onto the Bruce Trail.

Blogging the Bruce: a Decade later

Writing about our time on the Bruce Trail is also unique among our blog postings and recounting given that it is not being written as we hike but almost 10 years later.  While many aspects of our accounts will be familiar – time in nature, tracing the pathways, the photography, and the highlighting of birds – the fact is that this account has now been largely written and revised years after we first set out onto the Bruce Trail.  In the time since we last had the privilege of walking the Bruce and exploring the Niagara Escarpment we have trekked a long long way.  So our perspective and our writing is undoubtedly somewhat shaped and tempered by what has long since followed  Nonetheless, the fact remains that our time on the Bruce Trail taught us a great deal about hiking, the outdoors, self sufficiency, and exploring Canada! 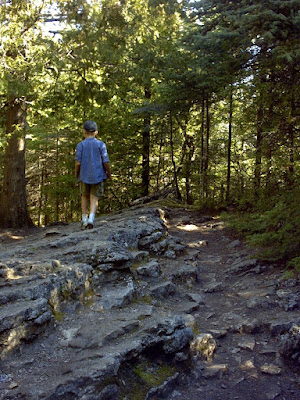 We hope you enjoy our blog, our photographs, and the Bruce Trail as much as we still do!

“Hiking, backpacking, and spending time in nature have an intrinsic pull on each of us that is fundamentally more fulfilling than the sounds of the city, the rush of traffic, and the time spent at a desk or in front of a computer....”

Sonya Richmond, Come Walk With Us

Welcome to Our Blog about The Bruce Trail

This blog describes our walk along Ontario's 900 km long Bruce Trail .   We hiked parts of the trail as independent day hikes, other se... 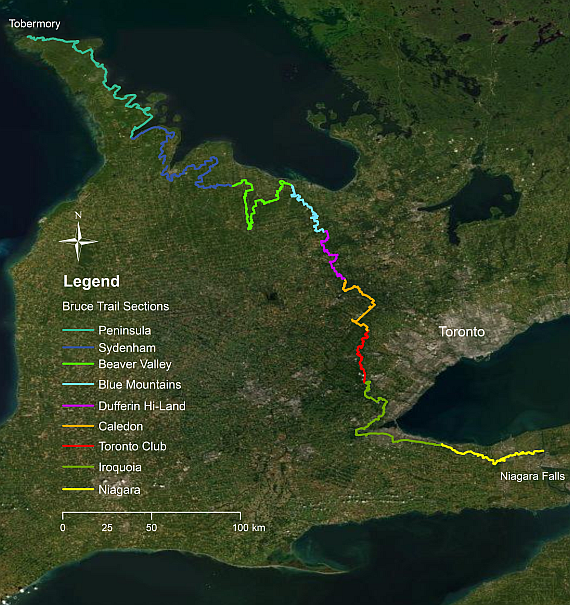 Sonya and Sean
Sean and I discovered a passion for hiking while at university together in southern Ontario, and we have spent as much time as we can away from our computers ever since, hiking, kayaking, travelling, and camping across Canada. My love of birds, nature, and the outdoors led me to a career in conservation, while Sean has transitioned into the world of freelance writing and landscape photography. While we both spend quite a lot of our working days in front of computers, we take every opportunity we can to get outside and explore, disconnect from the digital world, and recharge. We completed our first medium-distance hike in 2016, when we walked 800 km along the Camino Frances, from St. Jean-Pied-de-Port, France to Santiago de Compostela, Spain. We followed this with a 780 km hike along the Via Podiensis, from Le Puy-en-Velay, France to Roncesvalles, Spain in 2017. Since then we have trekked the Camino Portuguese across the length of Portugal, Ontario's Bruce Trail from Niagara Falls to Tobermory, and Newfoundland's beautiful East Coast Trail. Lately we have been planning our next big adventure ... crossing Canada on the 28,000 km along Trans Canada Trail!